A number of relevant stakeholders from the Council, schools and other organisations were invited to complete the play survey.

The below table contains information on what job role or position the stakeholders have within the community. Overall, 53 key stakeholders participated in the survey. Only one skipped the below question.

Opinions on play sufficiency in Pembrokeshire 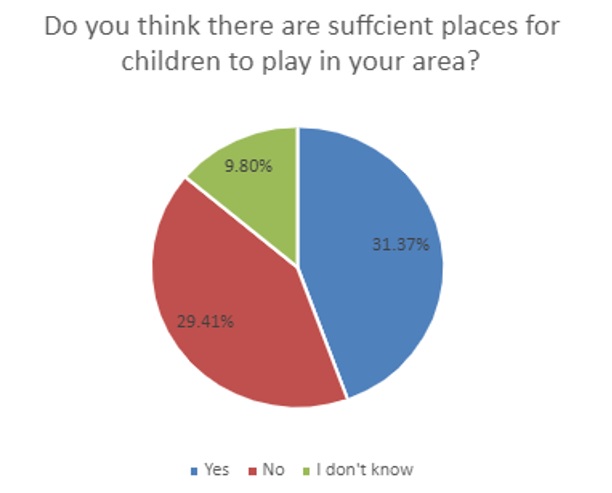 Next, the participants were asked what sorts of activities they believe are the most popular among the children and were prompted to write their own answers. Out of the 41 respondents, six of the stakeholders mentioned sporting activities, with all of them mention football. Others gave more than one example and listed sports such as climbing and rugby. An individual specifically stated:

Including the above comment, five respondents mentioned imaginative or creative play to be popular among the children. Another five participants made comments about skate parks and/or skating to be popular. An individual specifically stated:

“Apart from swings and slides, which will always be popular, I find children are looking for more challenging and adventurous equipment. Climbing rope ladders, balancing on rope bridges, wooden themed e.g. pirate experiences, increasing their physical, mental and social skills.”

In contrast, the stakeholders were then asked what they consider the least popular activities to be. With only 25 participants, giving answers in this section a common theme was playground equipment with three participants stating:

“As I reiterated earlier, swings, slides and roundabouts will always be 'standalone' pieces of equipment especially for younger children, both as they get older, 7 plus, more challenging and imaginative experiences are needed.”

“Reading, board games traditional games that are going out of fashion.”

“There doesn't seem to be much interest in the games we have marked on our school playground; hopscotch, snakes & ladders.”

The effects of COVID 19 on play sufficiency

Stakeholders were asked whether they felt COVID-19 had affected children’s play. The answers were fairly divided, with more stakeholders answering that no, it had not

Stakeholders who answered where prompted to give a reason as to why. They supplied us with the following statements:

“Of course playgrounds are not cleaned after use”

“Anxiety is an issue with some children”

Barriers of play and play provision

In this, section the stakeholders where asked if they think children face difficulties when trying to participate in certain activities and if so to give on comment on why

When giving suggestions, five respondents made note about disabilities being a barrier to certain activities. Comments about this said the following:

“Disabilities of all kinds can and do affect the way these children can participate, so all new parks should be planned, to include children, especially children with physical disabilities, to have wheelchair accessible equipment.”

“Having worked with a young wheelchair user and trying to find and access activities that were suitable and accessible it was very difficult. Many pavements are too narrow, we could only go to places on a bus route where the ground was paved, even going for a walk was limited.”

“If children have disabilities, then it is going to make participation in certain games more difficult: I would hope their friends would modify their play so all that wished to take part were able to.”

Next, the participants were asked ‘What additional play provisions would you like to see provided? Please specify:﻿’

The 31 respondents to the question gave the following suggestions. 11 respondents mentioned playgrounds, with 4 of these suggesting improving existing ones and the other 7 suggesting new play areas to be built. With one individual specifically saying:

“In my area, a multi-use play area (MUGA) would be hugely beneficial.”

4 respondents made comments on how outdoor areas like parks and trail walks can be improved, 2 respondents mentioned ‘skate parks’ and three made references to more ‘indoor’ or ‘covered’ play areas.

Interestingly, when asked if feedback or questions about play provision are received a majority said ‘No’. 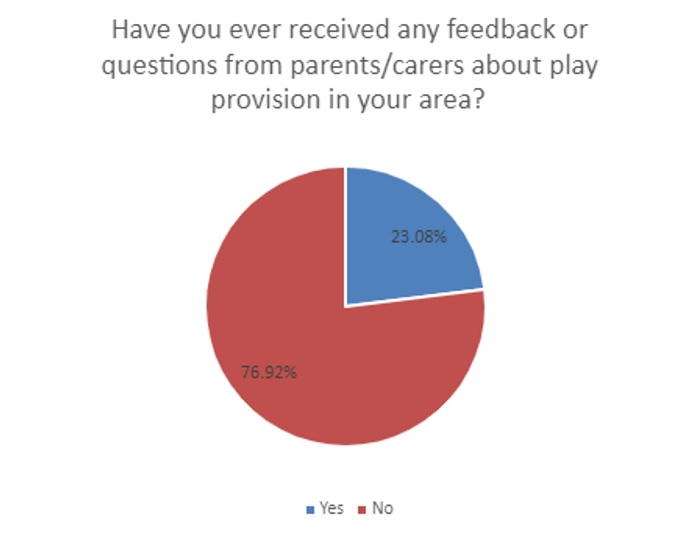 Eight participants gave some examples of feedback they received. A common trend was play areas and play equipment to be added or refurbished.

“I put in a request for a grant for a MUGA.”

“We send our half yearly questionnaires to all parents so we can keep on top of any changes that they would like to make.”

“For the park to be toddler friendly, wheelchair accessible and friendly also.”

“What there is for children with ALN, when will their local play areas be reinvigorated, dog muck worries, lack of seating for parents and carers, lack of toilets in parks.”

“We've received feedback, particularly from the children, on items that we have installed here at school.” 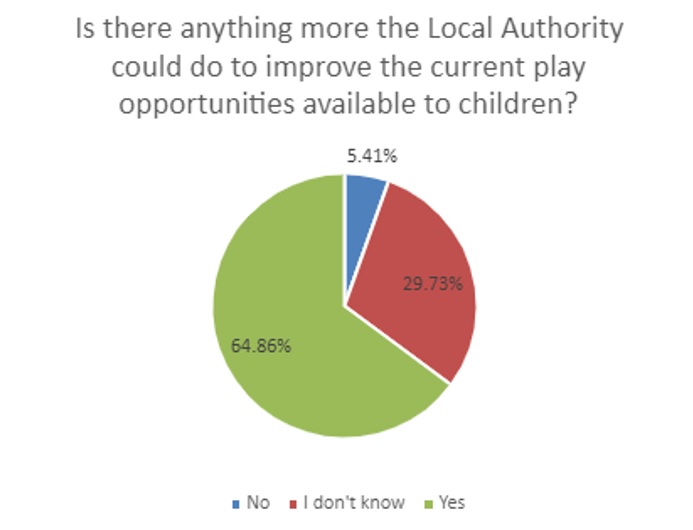 Stakeholders were asked if the LA could improve current play opportunities. As shown below the majority 64.86% responded with yes, however 24 respondents expanded on this. A small minority 5.41% believe no improvements should be made, While the final 29.73%% were not sure what could be done.

The two statements are as follows:

“As a Palliative Care Play Specialist, I am passionate about the play and the value it brings. Children need to build confidence after COVID and increased community play events would help with this”

“Community Councils like to spend extortionate amounts of money on play equipment that isn't always what children want. A few town play sites are suffering from anti-social behaviour that needs to be clamped down on. Haverfordwest skate park is an excellent resource, though could do with one south of the county.”

During spring 2022, 21 play workers from settings across Pembrokeshire were invited to complete a Computer Assisted Telephone Interview to share their views on how the play needs of children and young people are being met in Pembrokeshire. The Council received a response from 4 of the play workers (19%). The provider types responding to the survey are shown in the table below, with some play providers spanning multiple types.

Providers were also asked what types of play they currently provide. 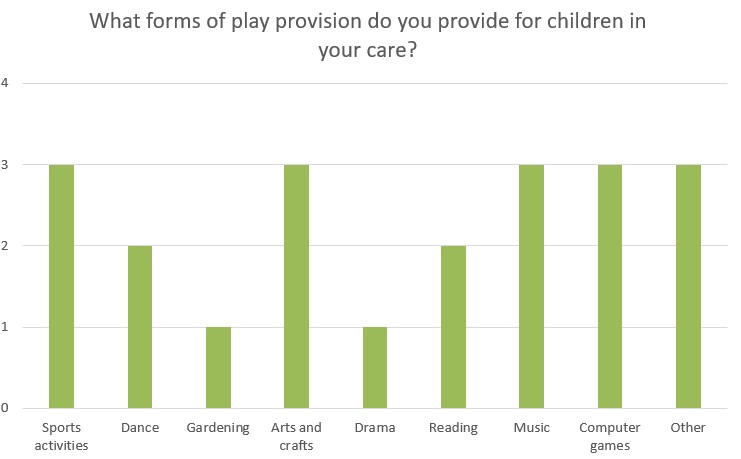 75% of providers interviewed noted that they either are intending to bring in new provision or activities, short-term or long term, including:

One provider stated that they give children questionnaires to find out what they would like to play, but whether this is possible is dependent on funding.

75% of the providers surveyed felt that some children had difficulties engaging in some activities. Reasons given for this were:

“Mostly positive, children are happy in our care.”

Impact of Covid-19 on play provision

Play providers were also asked if their provision had been impacted by Covid-19 over the past 2 years. 75% reported that it had in some way. 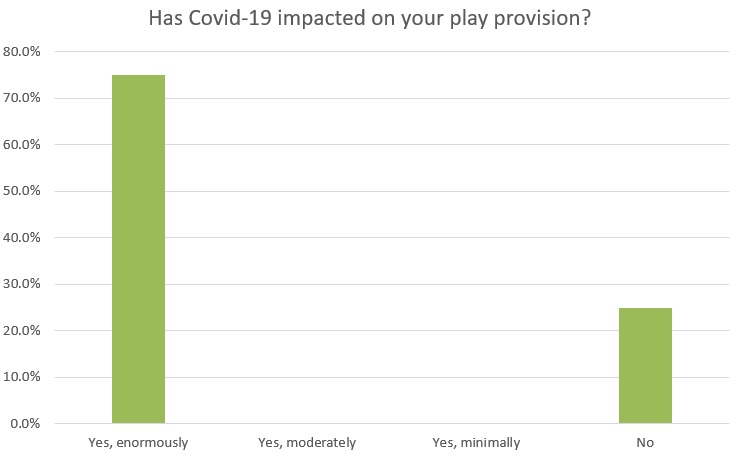 Play providers noted that the bubbles system meant that during the pandemic, they had children coming to them from a wider range of schools. Some providers were unable to open their clubs over covid with changing school times and had lots of uncertainty during the period. One setting stated that their numbers were only just high enough to cover the cost of opening.

Another play provider also said that the pandemic affected their finances significantly, as well as children’s development and staffing. The provider noted they were seeing a rise in the number of children with ALN since the pandemic and had to go back to basics of building routines and rules and developing social skills for many.

Higher turnover of staff was another issue raised by play providers, with older members of staff leaving during the pandemic and problems.

Feedback on support provided by the Council

Play providers were asked if there is anything, more the Council could do to improve the play opportunities for children and young people in Pembrokeshire. All play workers responded yes, and the following statements and suggestions were made:

“Think they do a good job but should continue reaching out a bit more to disadvantaged parents, more funded places, help with transport, need support and encouragement to get them to places.”

“Some parenting lessons for new parents would be really useful, if it’s possible for the LA to provide this.” [NB: Parenting courses are currently offered via Team around the Family within Pembrokeshire]

“Think Pembrokeshire do a good job, more is always better, but think they do a good job encouraging children to play. Great how we’re supported with funding, would be great if this could continue.”