To gain an understanding of how play sufficiency directly impacts school-age children, primary and secondary schools in Pembrokeshire were surveyed via a short, online, anonymous survey. The surveys were primarily based around afterschool play time, school clubs, areas of play and barriers that effect play e.g. the area and/or COVID-19.

In total, 157 pupils completed and submitted a survey. The age group of each respondent is detailed below: as is shown, the most respondents to the survey are aged between 11-12 (i.e. year 7/8 pupils) at 24.2%, however participants range from primary school to college age students. Invalid ages were not included in the table below:

The gender of the participants can be seen below. Just over 15% more boys answered the survey when compared to girls.

In the survey the respondents were also given the chance to give the name of the school they attended. Ysgol Penrhyn Dewi had the most pupils participate in the survey compared to any other school in Pembrokeshire. A total percentage of 23.71% of received surveys were completed by pupils at this school.

Pupils view on out of school play time 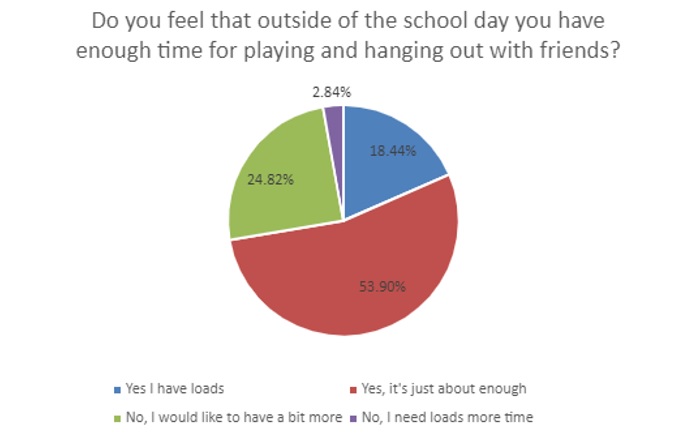 A majority of pupils believe they are given enough play time outside of school hours, with 53.90% stating: ‘Yes, it is just about enough’. In addition, a further 18.44% stated: ‘Yes, I have loads’ (see below).

The responses suggest that the amount of playtime given to the children across the surveyed schools is currently sufficient, with only 2.84% stating: No, I need loads more. When the 39 respondents who answered ‘No’ were asked to give reasons on why they felt this way, one pupil replied:

A recurring statement from CYP was that the school day hours take up a lot of time, leaving minimal time for play.

When asked what the participants think of the areas they play in, the majority responded that they can do some or all of the things they like. 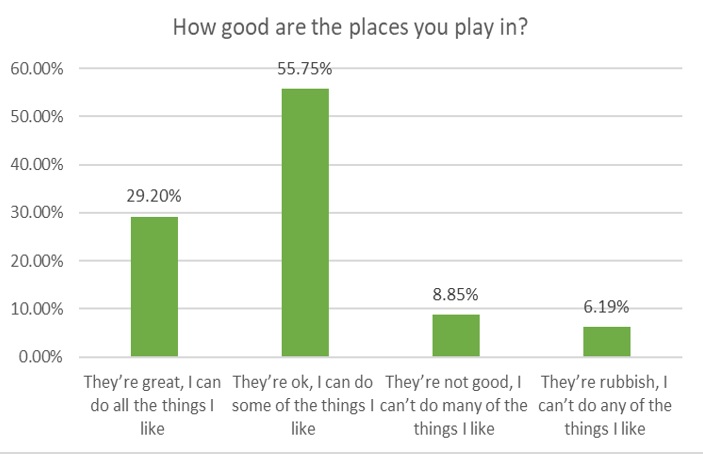 When asked how safe they feel when playing or hanging out, almost 40% of CYP said they usually or always feel safe. Only 6.09% stated they do not play out at all. 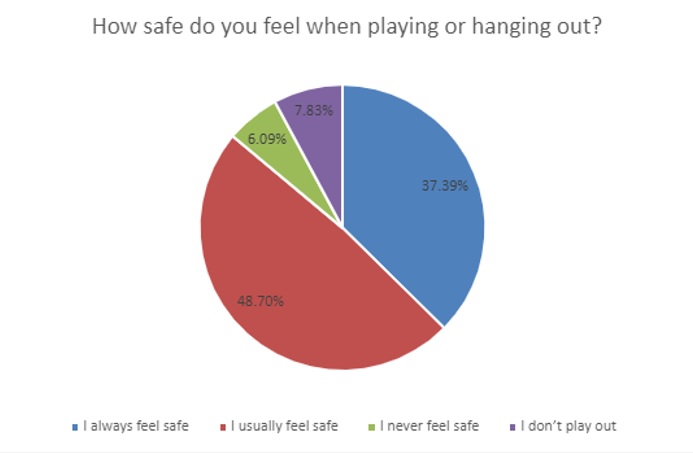 The 7.83% who replied with ‘I never feel safe’ had a follow up question asking why they feel this way. A common response was ‘other people’ and behaviours such as bullying and older teens intimidating them.

The below table shows what the participants think of the area they live in regarding playing and hanging out. The majority of pupils, think that it is good or ok, but could be better. This gives the impression implies that CYP would like to see slight improvements such as refurbishing, new equipment and keeping the area clean.

Expanding on this, the participants were given the chance to express what they like about their neighbourhood in regard to play. Four pupils explained it is good as they live relatively close to parks and makes it easier to meet friends. A further three stated ‘A park’ and another two referred to ‘Fields’. Two pupils also explained ’the quiet’ was a factor. Other comments included:

hard living in a remote area and one specially wrote ‘it is rural and children are not allowed to play without and adult’. Other comments included:

Where the pupils decide to spend playtime

When asked ‘When you’re not in school, what types of places do you play or hang out in?’ An extensive list was given (see below), and the pupils were instructed to tick as many statements that relate to them as necessary.

The majority of pupils stated they play in their own homes or at a friend’s home. 71 pupils stated that they play in their own or a friend’s garden. With these two statements being the most popular, it can be assumed the majority of children may stay at their own or a friend’s home to play rather than going out to play. 58 children, however, stated they play ‘In a place with swings, slides and other equipment to play on’. The least popular choices where: ‘At a childminders’, ‘at a holiday club’ and ‘At a play scheme’. All three of these choices had only one response each.

If responding with ‘or somewhere else?’ the pupils could give their own answer. Two individuals stated they play in the ‘Town’ while another stated they use the gym.

To expand on this, if the pupils stated they cannot play in the places they would like, the next question asked for the reasons as to why. Overall, individuals described that they ‘live too far away’ to have access. Four participants detailed there being a ‘lack of transport’ from their village or town. A further two participants also explained that a local park is ‘run down’ and ‘needs updating’.

Play provision out of school time

As part of the survey, the participants were asked to identify as many people as necessary who care for them out of school hours. 64.42% stated that their grandparents look after them outside of school. 30.77% stated someone else in the family looks them after. 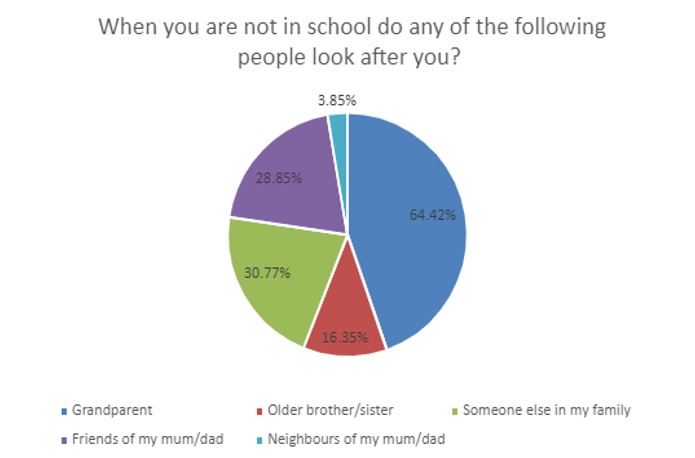 Pupils were asked how they commute to their areas of play. Around a third of pupils are taken to their play settings in the car, with around a quarter walking or riding with an adult.

Following up from this, participants were then asked how they travel to school. The below chart displays the data collected. 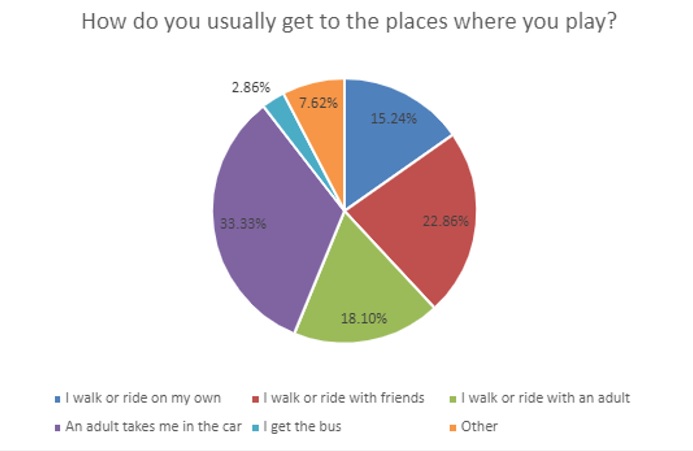 Data shows that 18.10% of pupils ‘walk or ride with an adult’ to get to school. Almost a third stated ‘An adult takes me in the car’. Linking this chart to the previous, we can assume that a majority of the children are taken to needed location by parents/carers in a car. Interestingly, more children walk to school with friends, opposed to walking alone, 15.24% stated they walk alone and 22.86% walk with a friend.

Activities and clubs wanted by participants

CYP listed up to five activities they participate in when not at school. A common activity that came up was football, with 15 individuals including this as one of the five activities. Another popular answer was gaming with 12 pupils giving this as an answer, including ‘Xbox’, ‘PlayStation’ or ‘iPad/computer games’. Nine participants stated ‘park’ or ‘field’. Other comments included:

When asked ‘Does the breakfast club, holiday club or afterschool club you attend take place at your school?’ More than half of CYP replied with no.

This may indicate that either the children do not go to any sort of clubs, or they attend clubs elsewhere.

The impact of COVID-19 on play

The way the COVID-19 pandemic impacted children’s play is considered throughout this PSA to create a more accurate assessment of play sufficiency. The below graph helps demonstrate how CYP think COVID-19, lockdown and restrictions affected how they play 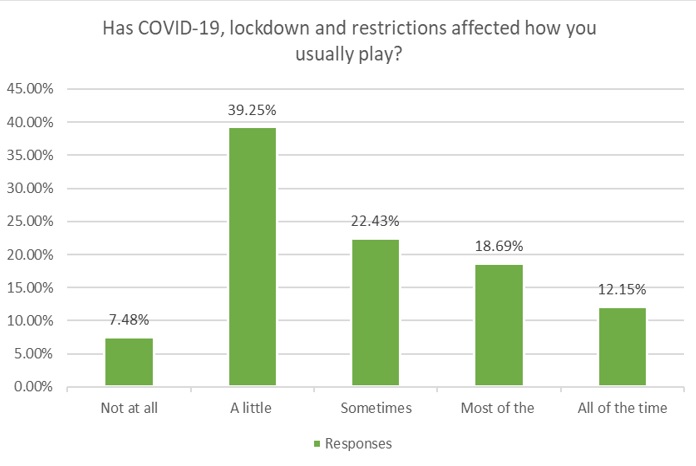 39.25% claimed the pandemic only affected their play ‘a little’. 22.43% of CYP responded ‘sometimes’ and ‘most of the time’. This information can be linked back to where the pupils decide to spend their playtime and a majority voted for ‘at my own home’. 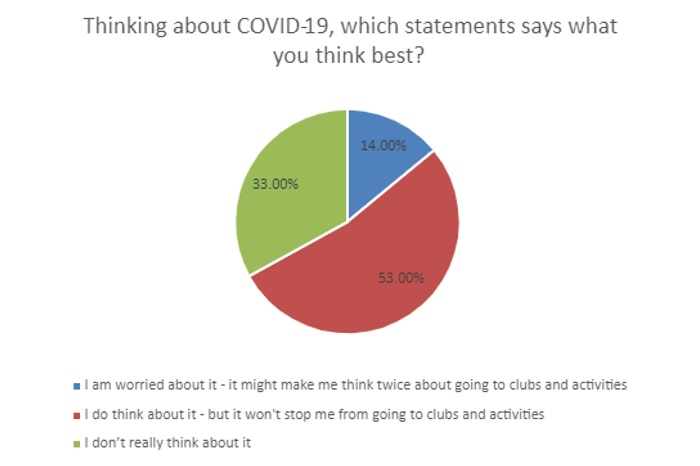 When asked how the pandemic affected them a respondent said: ‘It has affected my rugby, football and motorbikes because all of those sports involve close contact with other people.’ A further three pupils indicated that a sport they play was affected. Two pupils made a point about after school clubs being postponed. A pupil also stated: ‘I wasn’t allowed to meet up with my friends as often’, a further nine pupils made statements about not being able to meet with friends.

Primary school aged pupils were from years 5 and 6. The children noted that play to them mostly involved playing with friends, rather than playing alone. However, when asked if using technology/devices was classed as playing, nearly all children said yes. The children talked a lot about outdoor spaces accessed for play, including a local park and football field, which they visit regularly. They also noted that at weekends, the school car park is opened for play. All children in the focus group feel safe when going out to play but acknowledged that cars and traffic were sometimes an issue. Children also noted that whilst they had some play equipment for use at school, the Parents and Friends Association were working on providing more.

The children noted that the after-school club was no longer available, as this had not restarted after the pandemic.

CYP from the secondary school noted that they had opportunities for play through the school’s ‘Wellbeing Fridays’, where classes finished early for the afternoon and children take part in recreational activities such as sports, drama, swimming and radio projects. This shows that play is being incorporated into the school day.

CYP noted that other types of play they engage in include playing with friends, playing on the school field, using the youth room, which has a pool table available, and that they have sufficient time for play. Other activities they enjoy outside of school included going to the theatre, football, going to the skate park, racing and walking.

Some children noted being bored and their ‘mind not knowing what to do’ during recreational time.

Points that the CYP noted for improvement were having more things to do, more fitness equipment, cleaner, safer parks and more fun days and community events. In particular, they felt that the parks could be improved. Children also note some suggestions, including: