To support understanding around wraparound provision across the county, we surveyed primary and secondary school pupils from across Pembrokeshire via a short, online, anonymous survey, alongside an additional survey for headteachers of a range of settings across the county. The surveys were predominantly based around after-school club provision, with questions regarding access, availability, affordability and quality of wraparound care. The findings from each survey are detailed below.

In total, 76 pupils completed the online survey across the county. The year group of each respondent is detailed below; as is shown, the most respondents were in Year 6 at 23.68%, with the fewest respondents in Year 5.

Availability of after school club provision

According to survey responses, the vast majority of pupils go to school where there is after school club provision. Of 74 responses received, 93.2% responded ‘Yes’ when asked if their school has an after-school club.

Attendance at after school clubs

When asked how many days a week that they attended an after-school club (out of those who attend), the following responses were provided: 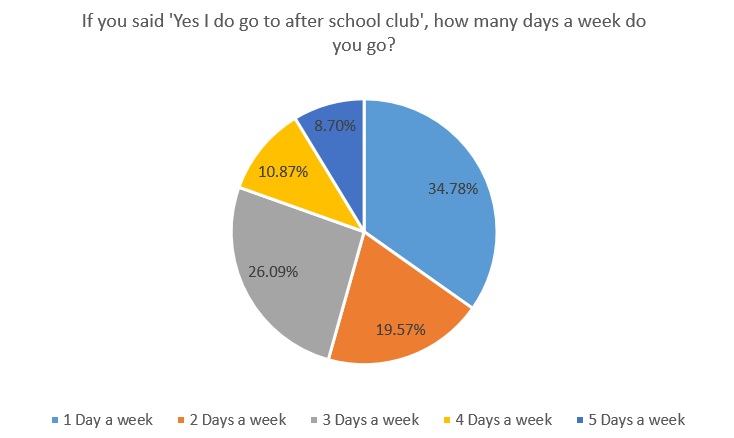 In terms of the reason(s) for attending after school club, most children stated that it was because their parents are in work (see table below).

Enjoyment of after school provision 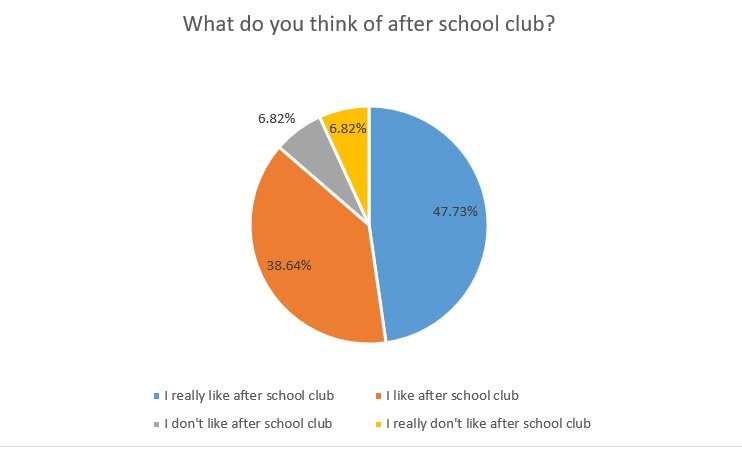 Reasons for enjoying after-school club were listed as:

“I like it because it keeps me fit and healthy.”

“I like after school club because you get to colour and draw stuff. I like playing with my friends. I would like to be able to go outside more.”

Reasons for not enjoying after-school club were listed as:

“None of my friends go to after school club. I often have to look after the little children. I would like to find a quiet place to myself and read or do some art work, but I can't because all the little children want me to play with them all of the time. I would like to play outside like we used to, but we now only have a tiny concrete area to play outside.”

A wide range of activities were provided when children were asked ‘what activities do you liked doing at after school club?’. These include:

When asked what activities children would like to do at after-school club, a range of activities were mentioned, including the following: 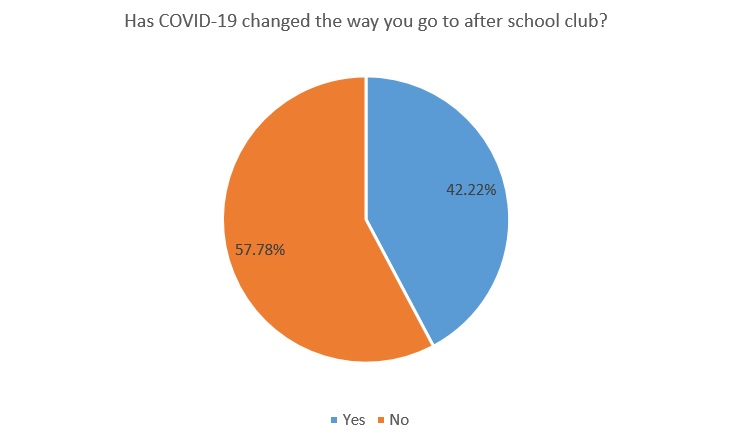 Various reasons were stated for the change in how children access after-school clubs, with the following listed as the most common:

In total, 33 pupils completed the online survey across the county. The year group of each respondent is detailed below; as is shown, the most respondents were in Year 11 at 24.2%, with the fewest respondents in Year 8, Year 9 and Year 10. There were no responses from pupils in Year 7.

According to survey responses, 25.0% of 33 pupils, do not know if there are any after-school clubs provided at the school, with 9.4% stating there are 1 or 2 clubs. The most common response was 5-6 and 7-8 clubs, with 7 respondents each. 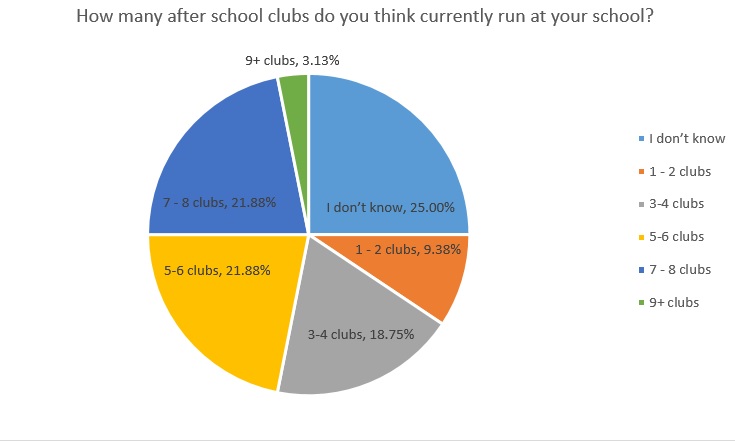 Attendance at after school clubs 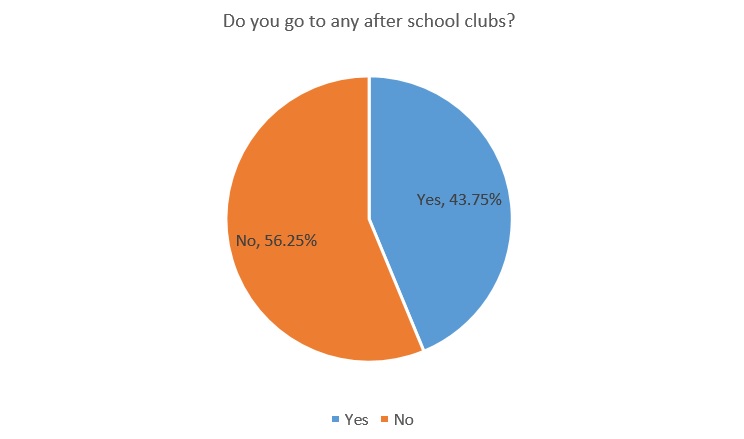 In terms of the reason(s) for attending after school club, most young people stated that it was simply because they did not want to attend (see table below).

For those indicating ‘Other’, reasons listed were due to not liking the available provision, a lack of awareness there was provision available, and no provision being available. Of those who attend their after-school club, respondents (15 in total) were evenly split between once and twice a week (46.7%), with 6.7% attending three times a week. 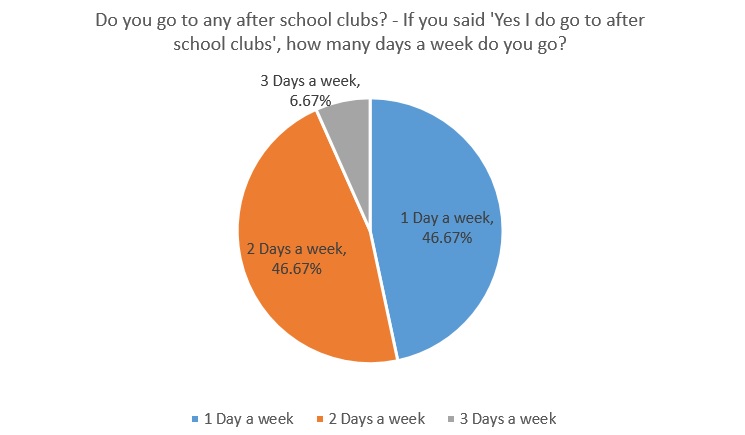 Reasons for attending an after-school club were listed as follows:

Types of after school clubs provided

A diverse set of answers were provided in response to the question: ‘Which after school clubs do you go to?’. As is shown below, orchestra, creative writing, netball and robotics are the most common after-school clubs accessed by pupils in Pembrokeshire secondary schools, according to the survey.

Pupils view on after school provision 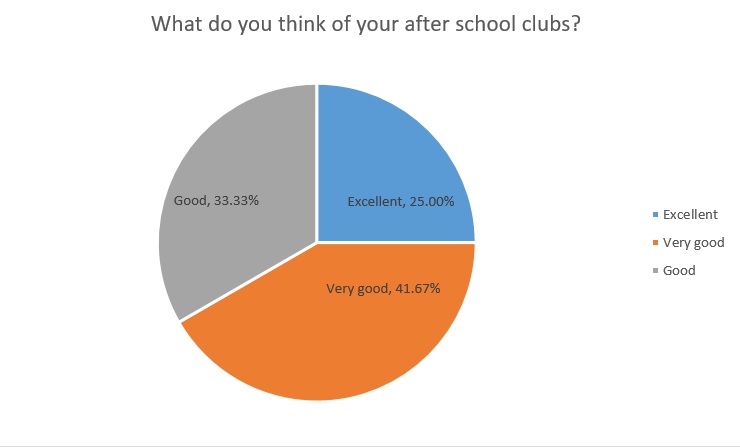 When asked ‘what activities would you like to do at after-school club’, an extensive range of activities were provided.

Of those who wrote ‘Other’, English (writing/reading/poetry), History, environmental activities, tennis, badminton and climbing were all mentioned.

The pandemic’s impact on after-school provision

COVID-19 has, for many pupils, had a significant impact on their experience of after-school clubs. Although the most common response to ‘How has COVID-19 changed your experience of after school clubs?’ was ‘has not changed’, this was often from pupils who were not attending after-school clubs anyway. Many pupils indicated that COVID affected mindset to activities, or that there had been an outright reduction or closure of clubs.

Additional comments provided at the end of the survey include:

“Due to the lack of face-to-face sessions because of Covid, classes also have been difficult to attend to regularly and I feel my education has impacted from it.”

“We aren't properly informed about clubs after school, by the time I find out they're full.”

Responses were received from 23 schools for the headteachers’ online survey, as listed below.

Headteachers were asked whether any of the following provision were currently in operation at their school at the time of answering the survey. Results are detailed in the table below.

As is shown below, nearly 87% of schools are currently providing free breakfast club, with close to half providing an after-school club. However, very few schools are providing paid for breakfast club, Flying Start or holiday provision, at 0%, 8.7%, and 8.7% respectively. It should be noted though that Flying Start provision is limited by external factors, namely, the postcode criteria set by Welsh government

Of those who selected ‘Other’, grandparents and after-school provision at another site were listed. 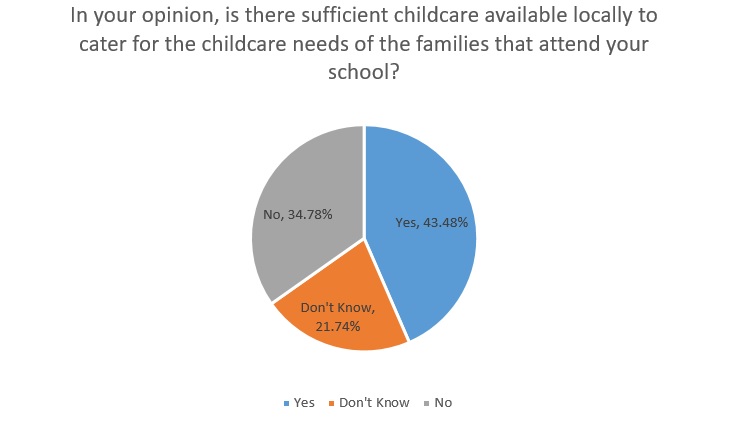 When asked to provide further comments, many respondents indicated that there was insufficient childcare availability to meet demand due to settings already being full; nurseries, childminders and Cylch Meithrin/wraparound provision were all mentioned as being oversubscribed. Equally costs were mentioned as an issue. A respondent from Pembrokeshire U002 stated that:

“We are an area of high deprivation with EFSM about 40/45% but do not have flying start provision.”

In some instances, the quality or provision itself were criticised. One respondent from Pembrokeshire U001 wrote:

“Disappointed that a local childcare provider does not collect pupils at the end of the part-time session and this results in the pupils starting school when they are full time rather than part-time.”

Another from Pembrokeshire U003 expressed concern over quality of childcare:

“My concerns are more around the quality of the provision that is being offered in the town. This is from the experience that we have had with the provisions in question.” 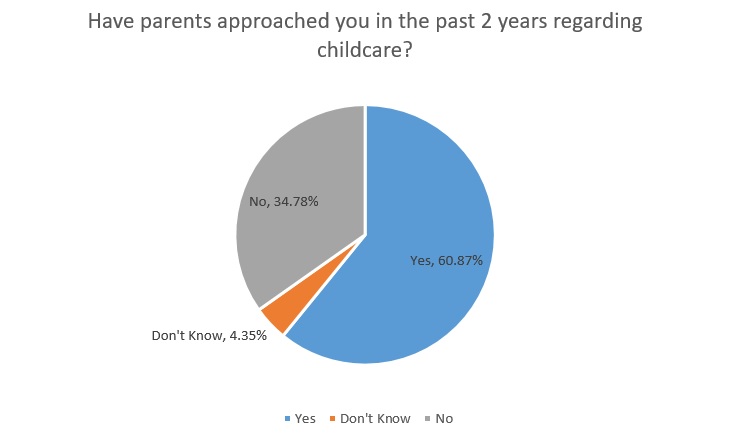 This lack of supply and high demand for childcare provision is further evidenced through headteacher response to whether parents had approached the school regarding childcare in the previous two years. In the prior two years, 60.9% of headteachers had been approached by parents regarding childcare provision. Five responses mentioned parents requesting wraparound care, with four requesting additional information or support around non-school childcare including day nurseries and childminders.

For many of those who had been approached, COVID-19 and the impact of lockdowns was an important factor, with four respondents indicating that they were approached for additional support when after-school/before school provision was reduced or stopped during lockdown.

For example, one headteacher in Pembrokeshire U002 stated:

‘Our after School Club is run by an external provider called 'Simply Out Of School'. Parents contacted us during the pandemic as the club was closed and they rely on this provision. Also, the club currently only just covers its costs. It would be a problem if it was to close.’

Over half of headteachers asked do not have available space within their school to develop childcare provision (see below), with 13.0% stating they do not know. Only 34.8% said there was available space.

Of those who indicated there was enough space, one respondent detailed plans for a new Welsh school which will add childcare provision, with another noting that they are currently working with the Council to explore the possibility of offering a privately registered playgroup for private tender. Two other responses expressed plans to open up new childcare provision at Narberth School and Prendergast CP School, respectively.

With regards to the affordability of childcare, respondents provided a range of responses to the likelihood of families taking up childcare if it was offered. Five responses listed affordability as a major issue affecting demand; if provision was free, or at least cheap, they would expect high demand. Fourteen headteachers stated there would be continued, or even increased demand, if more childcare provision was made available. Two indicated that there would not be enough demand either due to already existing local provision or there being insufficient demand.

When asked if they have noticed any trends in the demand for childcare over the past two years, 39.1% responded no, with 34.8% responding yes; 26.1% did not know. 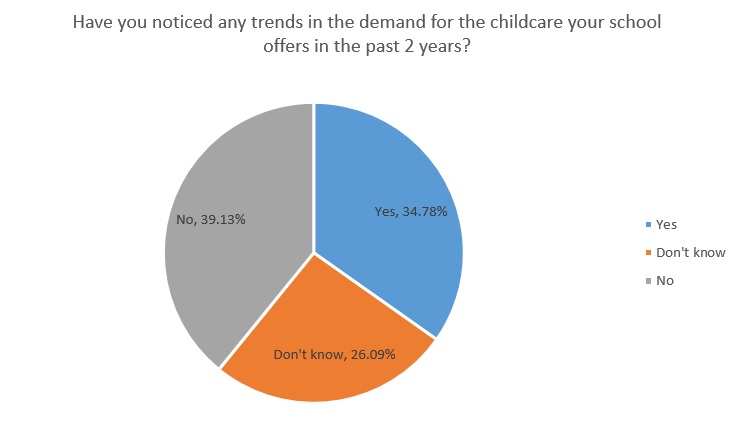 Of those stating ‘yes’, five noted increased demand with key worker, vulnerable children and those new to the area and without family links noted as seeing particularly increased demand. One respondent noted that there had been a decline in after-school club use, though there has remained a core of regular, consistent users; for breakfast club there has been no decline, with a large group of regular users. Another respondent noted that COVID-19 remote learning requirements made the acute needs of keyworkers more apparent.

Finally, additional comments made at the end of the survey touched on a variety of pressing issues facing each locality. One respondent noted that it is very difficult to make firm plans at the moment due to not knowing what the near future holds for schools, with a respondent from Pembrokeshire U002 noting that extra space would help the school to provide extra childcare in a small rural setting. Further comments were from a headteacher in Pembrokeshire U003, who wrote:

‘The area has a high number of fsm/vulnerable pupils and would benefit from a flying start set up.’

Another, also from Pembrokeshire U003, stated:

‘After school clubs for most parents mean longer than 2 hours. Once the club crosses that threshold it has to be registered with CIW this inevitably means a lot of additional work for the 'club' and that the club has to cover costs. This drives up the price of attending the club and that has a very inhibiting impact on running and sustaining after school provision.’